Went old-school for the latest build. This is the SDF-1 Macross in Storm Attacker configuration (TV version). It’s a 1/5000 scale plastic kit from Arii, from the Japanese animation “Super Dimensional Fortress Macross”.

Usually, old kits are kind of fun (this is about 30 years old). This one, however, is not. Proportions are off, details are lacking, and you have to do a few modifications to make it look nice.

I had to put the “elbows” in for it to be able to hold the Daedalus and Prometheus horizontally, instead of vertically. Plus I had to cut a chunk off of the deck of the Prometheus in order to fit properly. It would have listed, instead of sitting level. I also had to scratch build an antenna array behind the bridge area.

This took a little longer to build than I’d like, not because of the problems, but because of lack of building time on my part. Since the end of June I’ve been working 6 days, 42 hours a week at my part-time job. Not much energy to fight with a stubborn kit.

My advice, avoid this kit. The cruiser version from Imai is one of the nicest kits of this subject. But for the Storm Attacker, you’re better off grabbing a Hasegawa kit.

Another build finished. This is a Sv-262Ba Draken III, piloted by Bogue Con-Vaart. It’s a 1/72 scale plastic kit from Hasegawa, from the Japanese animation “Macross Delta”.

Very standard, simple build. I think the main construction was finished in about 3 days. The detailing, however…

The kit came with a ton of silver decals; however, I only used them to photo copy and use as a mask to paint the silver bits myself. I used Alclad II White Aluminum for all the silver areas. A difficult, but fun challenge, and I think it came out fine.

I modified the pilot figure, too, so that it could do the “Bogue Maneuver”.

After a break of 2 years, the Shizuoka Hobby Show had the modeling club exhibition on the final two days. The group I participate with is the VF-1 Riders, an exclusively Macross model building group. This is the third time I’ve been able to participate with them, and they have been participating for 20 years now!

The exhibition was changed a little bit this year, due to covid restrictions. No foreign clubs were allowed (since no foreign tourists are allowed into Japan as of yet), and I think no first time participating clubs were allowed either. Admission is free, but this year you had to apply for admission, so visitors were limited, too. Even though it was scaled back, there was still a lot to see and do. So, here’s what we did:

And that’s what we did! Don’t know when my next time going will be, but I will be going back!!

Latest build complete! This is a VF-0C Phoenix in the livery of the VF-41 Black Aces. Everything is 1/72 scale. The VF is from Hasegawa, Black Aces decals from Furball Designs, catapult and catwalk from Monkey Island Arsenal (猿島工廠), and deck crew from Fujimi. This is from the same timeline as “Macross Zero”.

Nothing too complex about this build. I finished up the VF first, then went onto the catapult and deck crew. Biggest problem is that our building is going through outside repair/maintenance, so I can really only use my airbrush on Sunday, since there’s usually a work crew outside our window the rest of the week.

I was a little worried about trying to get the deck crews uniforms the correct colors, when I realized that they’re no longer US Navy, but UN Navy, so I could make whatever changes I felt like. I also slightly modified the regular Navy pilots to give them Macross Zero era flight suits and helmets.

That’s got to be a bit terrifying, launching missiles mounted on top of your plane that go streaking by right past your head.

Another simple, easy to build kit. This one is a little unique, in that it’s a two-seater instead of the usual one man craft.

Masking out those panes in the front window? Major pain in the butt! It does come with a just the frame part so you can see the inside detail better, but all that does is make me think “Where’s the window?”

After about 7 months of work, I’m finally finished! Here’s a (monstrous) 1/20 scale VF-1S Strike Valkyrie from Plamax. Piloted by Roy Focker, it’s featured in the Japanese animation “Macross : Do You Remember Love?”.

It also includes the optional weapons set, and I used the normal optional water-slide decals (the kit comes with only stickers).

It may not look it, but this kit is a bit of a challenge (hence the 7 months spent working on it). Yes, it’s nice to have a huge kit like this, but the problem with big parts of plastic is that they have a tendency to warp. Badly. Doing the gunpod, I joked with a Twitter friend that I should have gotten a can of Bondo instead of Tamiya modeling putty. Unfortunately, that wasn’t far off the mark, as there was a huge gap because the plastic distorted. Also, there’s a boatload of small frustrations you’ll have to correct, stuff which a kit this size should have already dealt with, in my opinion.

But, in the end, it is kind of cool to have this huge Valkyrie sitting on your shelf. Just be prepared to work hard for it!

Apologies for the lower photo quality, but there’s no way this would have fit into my “photo studio”, so I just had to use my workspace.

Completed a companion piece, a same scale Hikaru Ichijo figure. Yes, I know a true companion piece to Roy should be Claudia, but `Plamax hasn’t gotten around to making her yet.

Hikaru was completed on January 28th.

OK, so the year isn’t over yet. However, there’s a 95% chance that the kit I’m currently working on now (started on in July) won’t be finished this year, so I’m posting now. Here’s what I did manage to complete:

See you in 2022! And I’m not taking on any big build projects next year, either!!

Back to Macross. Just finished a VF-11B Super Thunderbolt. 1/72 scale resin cast kit from Club M. From the same timeline as the Japanese animations “Macross Plus” and “Macross 7”. Weapons from Excelsus models (Wonderfest exclusives).

Ah, garage kits. Whenever I finish one, I think to myself, “That was fun”, and then I don’t even want to look at another resin kit for at least 6 months. Just the usual difficulties of parts not fitting together as well as they should (though this one wasn’t to bad) and having an entire paint job (all the way down to bare resin) get pulled off along with the masking tape you’re removing. And I still hate, hate, hate vac-formed canopies.

The biggest problem I had with this kit was one I probably created. On the back, below where the boosters are sitting, are two engine cover pieces that either weren’t in the box when I bought the kit many years ago, or I lost them when I took out the rocket boosters and weapons set for use on two other kits. Epoxy putty and sanding took care it it, though.

99% of the decals are from the Hasegawa Super Thunderbolt kit which I bought direct from Hasegawa. I think the Sky Blue accents look pretty nice, and match the color of the “Thunder Dragons” writing. I also purchased the gunpod parts at the same time, as for some reason the kit had the VF-11C gunpod (the skinnier ones used in Macross 7).

Another little Macross break. This is the Great Imperial Garmillas Astro Fleet Set 1, 1/1000 scale (except for satellite) plastic kits from Bandai. From the Japanese animation “Space Battleship Yamato 2199”.

Next is a G-BC-01 Kelkapia Class High Speed Astro Cruiser.

And last is a non-scale beam weapon reflector satellite.

All of these were a pretty simple build. Parts fit together well, and minimal seam line repair was needed. It’s kits like this that make me wonder why Bandai can’t ever do a good Macross kit. Only “change” I did was painting the orange/yellow bow openings, as I had forgotten about how crap Bandai decals can be (very thin and not very durable). 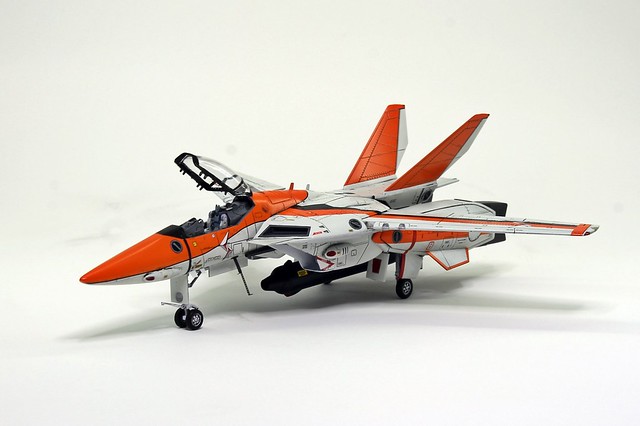 Another State of Emergency due to Covid-19, another long period of time where I’m not needed at work, another chance to get some building done. This is a VF-1EX Valkyrie, 1/72 scale plastic kit from Haseagawa, from the Japanese animation “Macross Delta”.

Now, Macross Delta is the newest of the Macross series. What are they doing using a VF-1 from the original series? This is a training aircraft. They’ve kept the VF-1 air-frame, but upgraded all the internal bits, including putting EX Gear in the cockpit. Instead of having a backseat flight instructor, the controls are slaved to the instructor’s aircraft, so they can remotely take control if the student is messing up.

I’ve never liked how the training aircraft was in the hero colors (though, you could say that’s done with holographic technology, like they do in the movie), so I changed it to standard training orange. All of the big color areas were painted (such a fun masking job that was!). The decals used were the various warnings, and the χάος (Chaos) symbol. I also used the Hasegawa PE set, plus some old Jasmine Models PE pieces I still had lying around.